After driving for about seven hours through persistent rain, I arrived at GSMNP via the entrance in Townsend TN.

After I set up camp in the Cades Cove campground, I drove the Cades Cove scenic driving loop (mostly in the rain) to scout out some possible shots for the next day.  The rain provided some mood, and I got a couple decent shots on this drive, but I was hoping for more the next day. 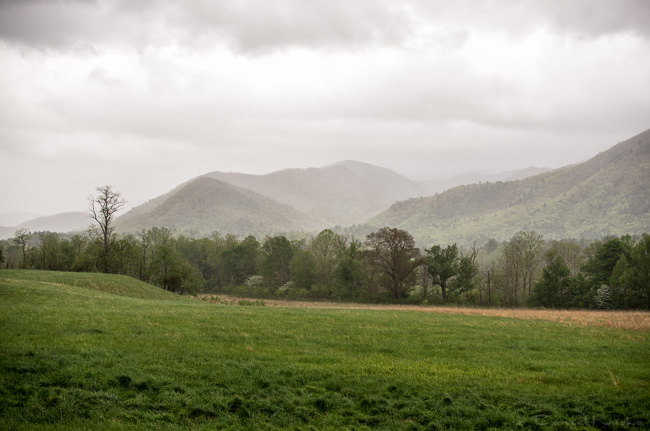 I found a tree in the meadow which seemed to be an obvious subject.  Judging from my web searches after the fact, it is clear I’m not the only one who has photographed this tree.

I got up at 6:00am the following morning, loaded the dogs in the car, and headed out.  When I got to the start of the scenic loop, the ranger (who I followed from the campground) was just opening the gate.  There were about a dozen cars already lined up, ready to go.  I spotted a couple other photographers in the line, but most were tourists wanting to beat the traffic that would appear later.

Once the line of cars started rolling, I found myself stuck behind a line of elderly tourists who were there to drive very slow and look at the sights, totally uninterested in the fact that I had to get to a certain point on this road (soon) or I may not get the shot I came for.  When I came to an intersection with one of the unpaved roads that cuts across the cove, I jumped at the chance to get away from the other tourists.  I wasn’t sure if this gravel road would cause me to miss the location I scouted the day before, but I took the turn out of frustration and hoped for the best.

Once on this road I saw only one other car, and it was another guy with a decent amount of money tied up in camera gear.  ‘My people’ I thought as I slowly drove past him, craning my neck to see what shot he was trying to get.

A few seconds later I stopped to get some shots of a deer in the meadow, and spent a few extra minutes trying to see what I could do with a bird on a barbed-wire fence.

After getting back on the main road, I was soon relieved that my short-cut gamble paid off.  The gravel road I had taken allowed me to get away from the other tourists and dropped me off just before the tree I was trying to reach.  I parked the car off to the side of the road and got the tripod and camera set up.  I was shooting with my K5-IIs and the 20-40mm LTD lens.

After a couple minutes of framing a shot with no appeal whatsoever, magic happened.  There was a break in the clouds to the east and a slice of morning sunlight began to pass over the meadow.  The patch of sunlight was so narrow that it lit the tree and foreground with a great golden color, but left the hills and sky in the background dark.  I already had the shot composed so I started shooting.  A few seconds later, the light was gone.  I started reviewing the shots I had just just taken and realized the tree would look better on the other side of the frame.  Then, as nature rarely does, it responded to my desire for a second chance at some great light.  Another swath of sunlight swept across the meadow, lasting only a few seconds, allowing me to get the shot I wanted.  It was an awesome moment, and it made the seven hour drive through the constant rain worth it.