One of the most unique features of recent Pentax cameras is Astrotracer.  Using the movable imaging sensor in combination with GPS, it allows you to take night sky exposures of up to five minutes using nothing more than a standard tripod and get images with NO star trails.  It sounds great in theory…

Having worked with GPS/tracking mounts for telescopes over the years, I  know how difficult it can be to get some of them working properly.  Having spent a couple nights testing the Astrotracer function on my Pentax K3-II body, I am happy to report it is both easy to configure, and easy to use to get night sky photos.

Astrotracer is available on previous camera models via an add-on GPS unit (O-GPS1), and it is built in to the body on the the K3-II and the K1.  On most Pentax cameras, the imaging sensor is ‘suspended’ using electromagnets.  The original use of this technology was to provided image stabilization, with the camera able to counteract the movement of your hands (around five axes of motion) during the exposure.  However, the geeks at Pentax started using it for other purposes, one of which is Astrotracer.

In short, the camera’s GPS knows where you are and what direction you are facing, and the camera’s internal computer moves the imaging sensor in the same path as the stars to prevent star trails.  The sensor has the ability to move enough within the camera body to allow exposures of up to five minutes without star trails.

My house is in the suburbs of Columbus Ohio, so I have crappy night skies due to light pollution.  My initial tests, while proving the Astrotracer system works, didn’t result in any mind-blowing images, UNLESS you already understand how hard it would normally be to accomplish this task.

The first step is activating and calibrating the GPS.  It is recommended to do the calibration routine each session to get the most accurate results.  The GPS activates with a simple button press, and it acquires the necessary three satellites within a few seconds.  The calibration routine (manually rotating the camera around three different axes until the camera gives you a thumbs up), took about another 20 seconds. 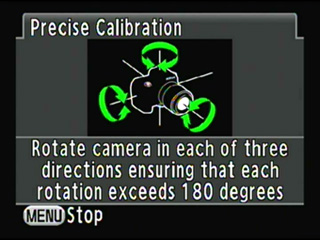 The hardest part of the process seemed to be focusing the lens.  On most lenses, even if you focus on infinity, the stars aren’t in perfect focus, as if the lens is focused PAST infinity (I wish Einstein was around to explain that one ;-).  Live-view magnification helped, but most of the time I would focus, then take a short exposure of 15-30 seconds, then check the image for focus.  Exposures of this length would also indicate if the Astrotracer function was actually working, revealing the presence, or absence, of star trails.

Once the test shot looked good, I was free to take exposures of a minute or more with little effort, and surprising results.

Due to the light pollution and the presence of the moon low in the east, my early tests resulted in washed out skies.  This could be corrected somewhat by dropping the black levels while post-processing.  Despite the stray light, the stars in the images looked good.

The image below is a 61-second exposure of Lyra.  It  actually shows a green blob which could be identified as the Ring Nebula (M57) under better skies or more magnification.  You can also see an airplane passing through the frame.

Remember, this is a single 61-second exposure, taken on a normal (non-tracking) tripod/head combination, using a 70mm lens on an APS-C camera (just to provide FOV reference), at f/4 and ISO 800.  There is no image stacking, and little post-processing other than dropping the blacks to counteract the affects of light pollution.  Using  any other camera of similar format and focal length, this exposure could have lasted little more than 10 seconds without star trails becoming noticeable.

I’ll continue to experiment with Astrotracer, and I’ll hopefully get it under some dark skies soon.